Our Story & How You Can Help 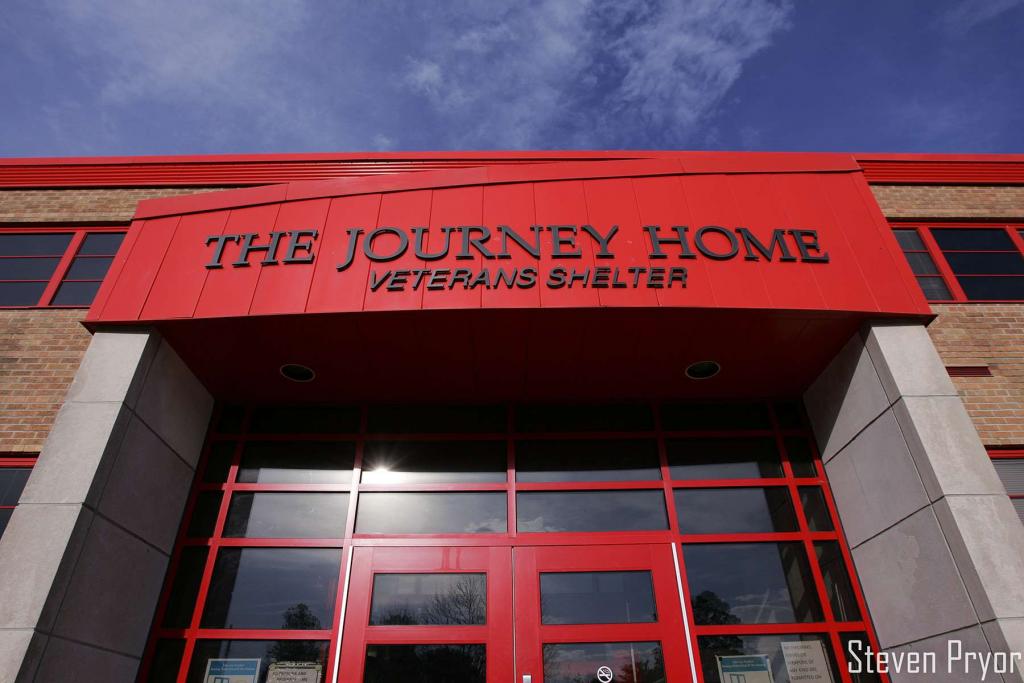 The magic of The Journey Home (TJH) is that its development was not bankrolled by a single individual or organization. The initial concept of a Veteran shelter, and now our current Mission and Vision of today was not designed or conceptualized by a few, but instead by a community of individuals with a love and passion to help Veterans. In early 2013, Randolph County leaders, community leaders and Indiana residents came together for the purpose of giving back and saving the lives of Veterans who are homeless and at-risk; experience suicidal tendencies; or who are lost and feeling hopeless. They developed the social and cultural awareness that there was something that Randolph County, East Central Indiana and Western Ohio could do to make a difference. Led initially by Linda Dehaven, Michael Kennedy and supported by many others, the concept of a 501(c)(3), nonprofit, Randolph County Veterans Shelter, Inc., was applied for, granted and a Board of Directors established.

Doing business as The Journey Home, a Veterans’ residential shelter was TJH’ startup program. The space for this facility was once a youth residential center and was sitting vacant. The building, owned by Randolph County, Indiana was offered to TJH for rent by the County Commissioners at a generously reduced rate. With five spacious rooms; a fully equipped kitchen; a large dining area; laundry room; offices and a day room; the mission of TJH became a reality. Operating solely on private donations, and after a little bit of remodeling, the first Veterans were sheltered by TJH in March of 2014. Veterans could stay in the shelter free of charge for up to two years. Accountability to house rules and structure were strictly enforced, however Veterans received limited access to VA and Non-VA services in this initial program model.

Like all grassroot projects, the early days were filled with difficulty and startup challenges. TJH experienced breakdowns in their programming and business models, and struggled with organizational development. At a low point in the early months of 2015, when the facility doors were closing, a new set of community leaders stepped in and took over. The Board of Directors were reorganized; a new Mission, Vision and Core Values were established; and new and important connections with individuals from the VA who wanted to help were established. The new Board of Directors – Claudia Thornburg, Steve Croyle, Gary Girton, Jim Hufford, Eldon Solomon and Sally Faulkenburg – rallied community support and government resources, and hired a new Executive Director. Later that year, October 2015, TJH entered into a contract with the VA Northern Indiana Health Care System. This partnership offered TJH a bed-per-diem rate for every bed filled, new and important measures of program accountability, and a networking relationship that linked TJH and the VA’s homeless services together.

What makes TJH’s vision so incredible? It has to be the number of local, regional and national communities that work in partnership with our staff and Board of Directors lending support in our mission to “End Veteran Homelessness”. Everything about our mission is dependent upon linking Veterans to their community and the community to their Veterans. This core value has both fertilized and watered the roots of TJH since 2013, and will continue to nourish this mission for years to come.

The Journey Home (TJH) is a nonprofit organization that makes Veterans our priority, with its mission to “end Veteran homelessness.” TJH Staff, volunteers, and Board of Directors accept this mission as a mandate given to them by the local, regional and national communities who invest in our growth and development as an organization. Homeless or at-risk Veterans may be suffering from a single issue, or a combination of issues such as a mental illness, PTSD, alcohol and/or drug dependence, or other medical and/or physical disabilities. TJH provides a safe and supportive environment where veterans can be honored, respected, and treated with dignity while experiencing the demanding accountability of working through their recovery and of either maintaining or obtaining permanent housing.

Operating with a “housing first” concept, TJH identifies five (5) key performers that indicate success; 1) finding and getting the Veterans off the streets out of homeless camps or from living under bridges, 2) retaining or transitions Veterans into permanent housing, 3) develop or improving Veteran employment opportunities, 4) engage the Veteran into VA, State and local Non-VA resources and benefits, and 5) to provide these services to our Veterans free of charge. The following statistics and definitions guide our involvement with at-risk or homeless Veterans.

91% of homeless Veterans are Male

55% of homeless Veterans have disabilities

45% of homeless Veterans suffer from a mental illness

45% of the homeless Veteran population are African American or Hispanic

33% of homeless Veterans were stationed in a war zone

National Coalition for the Homeless

For every 100 Veterans, 1 is at risk of becoming homeless

The establishment of limited or low barriers in determining entry or removal from TJH programs and services. Programs and operation objectives are to work with Veterans through their recovery.

A formal definition of harm reduction refers to “a range of public health policies designed to lessen the negative social and/or physical consequences associated with various human behaviors.” TJH combines the use of credentialed mental health professionals to assess and clinically reduce the harmful effects symptoms, behaviors and issues presented. This practice is experienced by meeting the Veteran with programs and services within their emerging or critical needs.

With these guiding terms and statistics, TJH has evolved themselves to more fully serve both at-risk and homeless Veterans, than only being a transitional home for homeless Veterans. We’ve learned that a Veteran’s struggles are unique and this population is more vulnerable than we assumed. We’ve realized that their care is not only the responsibility of the VA or the US Government, it is also the responsibility of every US Citizen. A US Veteran gave of themselves for the freedoms we individually enjoy. We can give of ourselves to a Veteran in ways the VA or US Government cannot, and provide support and resources to lift them up that are not otherwise possible.

Programs and services at TJH include local, regional and national outreach efforts to find Veterans at-risk; those who are living in homeless camps; who are living in poverty or who are displaced by a natural disaster. TJH outreach programs connect Veterans to their communities and to local, regional and national resources where their rebuilding can begin and can be sustained.

What You Can Do to Help

Our appeal is simple: If you know of a Veteran in-need, help them. Learn all you can about homelessness and Veteran issues. Give The Journey Home (TJH) a call. We have the expertise, the knowledge and awareness to assist, to provide information, and to provide guidance. Donate your financial resources and time to assist our mission to “end Veteran Homelessness.”

Everyone needs three (3) things in order to thrive; healthy interactions, healthy connections and healthy relationships. A couple of weeks after Hurricane Laura, a victim of the Hurricane and Vietnam Veteran pulled up to our food line. With emotions in his eyes, he asked if we had food available. We said “yes,” and with genuine relief and tears in his eyes he sobbed as we handed him food and meals. Not knowing where to go for support and help, he told us that he had not eaten in several days and did not know if he would get a meal that day. There were several organizations that were serving food and supporting the community, but when we feel helpless and hopeless it is hard to see through the haze of our own worry and fears. We fed him for a couple of more days and offered other support, but that is all he needed.

For others, the needs are greater. Many of the homeless experience a chronic disability, illness, post-traumatic stress, or addiction contributing to homelessness. Almost all have been homeless for multiple years. Randolph County Veterans Shelter, Inc. / DBA: The Journey Home, a nonprofit 501(c)3, is much more than an organization on the mission to “end Veteran homelessness.” It is bigger than transitional services or outreach programs for Veterans at-risk or who are homeless. It offers communities the opportunity to take care of our American Heroes. Many of the Veterans who walk through our doors or pick up the phone do so with a disabling sense of hopelessness and a loss of personal dignity. When communities step up and get involved, big things happen.

TJH recognizes that recovery is a long process, with many challenges and stumbles along the way. Veterans have earned our support, patience, help and mercy as they work through their recovery. We trusted them as they defended our freedoms. They walked into the line of fire willingly and knowing the ultimate sacrifice as a result of their dedicated service. They served us, now it’s our turn to serve them!

Your contribution is tax deductible! Please give now to help Veterans during their time of need and to support the efforts of The Journey Home.

The Journey Home will honor, empower, and provide essential programming to homeless and at-risk Veterans for their journey to achieve and sustain healthy interactions, healthy connections and healthy relationships.

Help a veteran in need by contributing a donation of any amount.

Donate supplies to veterans in need with our Amazon Wish List.