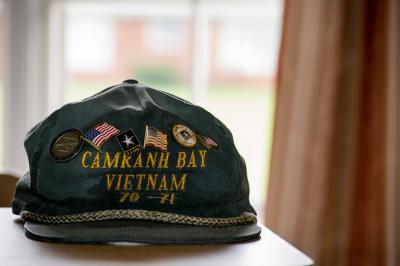 The Journey Home (TJH) is a transitional home for homeless Veterans. Many of you have been following one of our former homeless Veterans, Herbert Shaw, as he participated in Honor Flight Dayton on September 8, 2018. You contributed money for his Honor Flight Guardian and wrote letters to Herbert and/or joined us at the Dayton International Airport for the Welcome Home Celebration. You’ve continued to ask about Herbert, expressing interest in his story and in how he is doing.

Herbert described his experience with Honor Flight Dayton and the Welcome Home Celebration as the welcome home he did not get in 1970. Herbert remembers being told by airport personnel as he de-boarded the plane home from Vietnam that he was not welcome back in the Country and that he should go back Vietnam.

Being a Vietnam Veteran, Herbert was refused employment and rejected by his community and many in his family. Honor Flight Dayton went a long way in his healing from that rejection and homecoming wounds, and to feel the pride he deserves.

Herbert fought for and sacrificed for the freedoms of this Country near the Jungles of Cam Ranh Bay Vietnam. Herbert participated and experienced the realities of war. He was wounded, went on combat missions and was given mission orders that would put any human being in moral conflict. He served his Country and followed orders, and though he came home alive, Herbert left a big part of himself there.

Herbert’s story into homelessness is preceded by years of rejection, with experiences of anger and hostility resulting from those who rejected his service in Vietnam. For Herbert, this rejection has been difficult to overcome, until recently when finding The Journey Home. “You help everybody,” Herbert states, “You cared about me, you didn’t just kick me outside like everybody else. You cared about me, you helped me. You let me know there’s still reasons left.”

Herbert found TJH after we received a phone call from the police stating that they found an older gentleman, who was a Veteran, in the park alone and without a home. A bit disoriented, Herbert told the police he had witnessed his two caregivers overdose on drugs and die. He was wandering the streets trying to figure out what to do.

After bringing Herbert to TJH our staff learned that the VA was aware of Herbert’s medical needs and were concerned about him, but those who associated with Herbert as caregivers concealed him from their inquiries and he was quickly lost from their view. 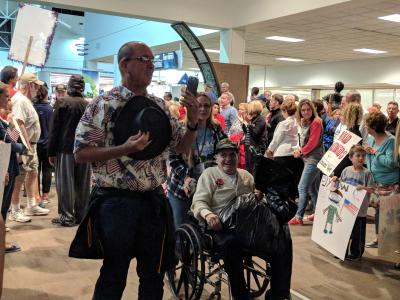 Herbert suffers from some dementia and needs assistance in daily living. Our staff worked quickly to reconnect Herbert to the VA and to community resources that could provide home health care and an assessment that would qualify him for an assisted living placement. He received consistent and timely medical attention. He gained weight and thrived.

The Journey Home Staff also helped Herbert find and contact an estranged daughter and his grandchildren. Seeing her father on Facebook and being connected to TJH has empowered Herbert’s daughter with the courage she needed to re-engage and do more in order to know her father. Phone calls of joy and tears have been made, and for the first time in years Herbert is establishing a healthy relationship with a member of his family.

After a recent phone call with his daughter, Herbert turned to our staff and said with the most heart warming smile, “She said she loved me.” Yes, there was a tear in his eye too.

Welcome home Herbert, and thank you for including us in your Journey.