The High Cost of Service

The High Cost of Service

We thank our veterans for their service all the time, yet we don’t really understand exactly what we’re thanking them for. The wounded are not only observed in the amputated or those returning with physical wounds, but also in those who silently suffer. It is difficult for those of us who’ve never served to recognize how great of a sacrifice our veterans have made. The first thing we can do to get a better understanding is to listen, and to support veterans as they share their stories.

We recently sat down with Scott, who shared his story of overcoming homelessness and addiction. Scott was a corporal in the Army who was injured in Afghanistan in 2009. Scott was given the option to return stateside due to the pain, but refused because he wanted to complete his mission. His loyalty to that mission and to those he would have left behind would not allow him to choose anything differently. The military prescribed him opioids, and sent him back to work. He thought nothing of the medication he was taking, and had no idea that an addiction and homelessness was in his future. 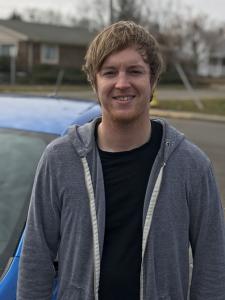 So, how exactly did a man who had no prior history of substance abuse become so reliant on drugs that he lost everything? Scott thinks about this question a lot. “When I was discharged from the Army, the VA cut me off and would not prescribe me anymore opioids.” Scott had to wake up to the reality that he was now addicted. This wake up call was not easy.  Previously relied upon to keep the mission going and “to bring my guys home alive”, opioids ended up taking everything of value away from him.

After his discharge in 2012, Scott returned to “normal” life with a new wife, hopeful to live a happy life as a civilian once again. However, he was still struggling with physical pain from his military injuries, “I had no way of handling [being without pills], so I had to go out on the streets in order to find more pills and all that eventually lead up to heroin.” Unsure of how to be the support system Scott needed, his wife decided she couldn’t take it anymore. It was then that Scott came to the realization that he had a problem. After his wife left, and in 2013, Scott checked himself into rehab at the VA and was stable for about a year and a half. Unfortunately, the pain of losing his wife and his home pushed him into a relapse. “I did not want to be a burden to my family anymore.”  Scott became homeless and slept in his car for nearly eighteen months.

Luckily, Scott was determined to overcome his addiction. He checked himself back into rehab with the VA in June 2017, this time fully prepared to get better. “I really didn’t want to die from these drugs…I’ve known a lot of people, a lot of buddies, who have OD’ed and died.” After spending 90 days in the Marion VA, Scott arrived here at The Journey Home. Because we are a transitional home for homeless veterans, Scott was able to truly devote time to his journey home, gather his thoughts and get his head on straight. Scott told us, “I could’ve had my voucher within a month after arriving here, but I held off because I didn’t feel ready. I wanted to make sure this time I stayed clean, and I knew if I went on my own without support right out of treatment I would likely relapse and end up homeless again.”

Our ability to individualize Scott’s recovery plan helped him transition and get back on his feet after treatment. He now has a job, a new car, and has moved into his own home. Employed at The Journey Home, Scott spends a lot of time with our other residents and other veterans. “It also helps to heal me, you know, helping other people out, especially veterans.”

The high cost of service isn’t often recognized, or truly comprehended, but we hope to bring an awareness to veterans’ struggles by sharing more of their incredible stories. Scott’s sacrifice to stay with his brothers in arms, and to “complete the mission” rather than returning home demonstrates true honor. And even more incredibly, he does not blame the Military for his addiction or his homelessness, or for losing his wife. The price Scott paid is extraordinary, but he believes it was all worth it: “Even though I lost a lot, it was worth having the chance to work with those guys and being able to bring them home alive.”

Scott does not see himself as a person deserving of much honor or accolades, nor does he want it. Our Veterans deserve not only respect and support, but also an understanding that there is a price in serving, and in defending and protecting our freedoms. Thank you for your service Scott, and thank you for sharing your story and helping us understand that price.  Welcome home!